Mycobacterium tuberculosis is the agent of tuberculosis1. Like the other mycobacteria, M. tuberculosis is an aerobic, non-sporulating bacillus whose wall is very rich in lipid, which gives these bacteria resistance to decontamination and resistance to acids. This resistance to acids of mycobacteria is important for two reasons. On one hand, it is used in diagnostic microbiology to stain mycobacteria in a different way, for example than the staining described by Ziehl. This stain will dye the mycobacteria in pink and counter stain all other bacteria and human cells that may be present in the clinical specimen, in blue thanks to sulfuric acid discoloration. The second reason why the acid-resistance of mycobacteria is important is that it gives them an ability to resist the acidic pH of the stomach, which explains why we can find living and cultivable mycobacteria if the ‘gastric juice is taken. In addition, this also explains why certain mycobacteria cause severe infections in the colon (colitis).

Tuberculosis1 was first described in 1839 and its contagious nature was already demonstrated by Villemin in rabbits in 1865. It was only then that the bacillus2 causing tuberculosis was described in 1882 by Robert Koch.

Tuberculosis infects an estimated 1.7 billion people worldwide today, resulting in an estimated 1 million deaths each year. The distribution of this disease is not homogeneous, affecting mainly African and Eastern countries, where the disease is very common, affecting more than one in a thousand people in some regions. 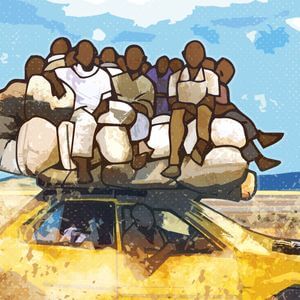 Tuberculosis is a good example of a chronic disease in which the “infection” stage (absence of symptoms) is distinguished from the “disease” stage (presence of symptoms). Indeed, although a third of the world’s population is infected with Koch’s bacillus, only about 5% of those infected will develop symptomatic disease in their lifetime. The risk of developing symptomatic disease in immunosuppressed patients is greater since they will have a probability of around 5% per year. Remember that this disease is very contagious, especially in cavitary pulmonary forms, since a large amount of bacilli is then found in the sputum (more than 108 bacteria per ml). The disease can also affect many other organs and is easily localized in the bones, especially in the spine where it causes a chronic infection called “Pott’s disease”. This chronic infection of the spine can lead to severe deformities of the spine.

The diagnosis of tuberculosis can be made by microscopy either by Ziehl’s stain or by fluorescence staining (auramine rhodamine). This staining causes the bacteria to appear fluorescent in color. Whether it is Ziehl staining or auramines the principle is the same since it is based on the resistance to discoloration following exposure to strong acids. Apart from microscopy, it is also possible to detect mycobacteria by culture on solid media or in broth. PCR is an increasingly popular alternative due to its better sensitivity compared to direct examination and its short result rendering time compared to culture.

Tuberculosis is usually treated with triple or quadruple therapy to prevent the development of resistance to anti-tuberculosis drugs. The treatment is prolonged (several months). A vaccine was obtained in 1921 following numerous passages in culture. This Calmette and Guérin bacillus, of attenuated virulence3, made it possible to limit the spread of this disease despite imperfect vaccine efficacy.